Kuroshitsuji: Lycoris that Blazes the Earth

Black Butler: Lycoris that Blazes the Earth (「黒執事」-地に燃えるリコリス-, Kuroshitsuji: Chi ni Moeru Lycoris) is the third musical adaptation of the Kuroshitsuji manga. The show originally ran in September 2014 and reran from November to December 2015, premiering in Osaka and traveling to Miyagi, Tokyo, and Fukuoka, Japan, before heading abroad. The first Kuroshitsuji musical to perform overseas, the musical toured Shanghai, Beijing, and Shenzhen, China, in December 2015.

In 19th century London, Ciel Phantomhive and his ever-loyal butler Sebastian Michaelis investigate a string of murders committed by the famous killer Jack the Ripper.

The musical opens with Ciel Phantomhive moments before he is supposed to be sacrificed by an underground cult. He summons a demon, this causes a group of masked cult members to panic. The demon briefly speaks with Ciel and forms a Faustian contract with him ("Despair"), he removes his glove to reveal his new contract symbol. The demon is ordered by Ciel to kill the masked dancers, and he obliges by violently killing them. Before exiting the stage, Ciel gives his new servant the name "Sebastian Michaelis."

Two years later, at Phantomhive Manor, the servants are met by the Double Charles ("Don't Resist It"). They engage in a short duel before being interrupted by Sebastian. They inform him that the Queen wants Ciel to investigate the Jack the Ripper killings in the city. Later, Ciel meets with Lau and Angelina Dalles for tea. Lau orders Sebastian to make tea for them that is the equivalent of Angelina's sophistication. Angelina tells the group they cannot accomplish this without getting to know her first ("Cooperators of the Investigation"). She is introduced as a doctor and she is part of high society by Grelle Sutcliff, her butler, and Lau. Angelina glares at Grelle and then turns to Ciel and chastises him for being so gloomy and being the "Queen's Watchdog." She then asks for a kiss and Ciel obliges. While Sebastian serves the tea, Angelina criticizes her butler Grelle claiming them to be incompetent. Lau discusses his business with the group. He mentions Jack the Ripper, and Ciel tells him he is currently investigating the case.

Aleister Chamber, the Viscount of Druitt holds a ball, he marvels at the beauty of his guests, which are all female dancers in ballgowns. This quickly changes to The viscount singing about his own vanity ("I'm the Embodiment of Beauty"). The set changes to the Phantomhive Manor. Angelina herself sings a short inter monologue ("Don't Lose Your Way"). She worries for Ciel's safety as "The Queen's Watchdog" and investigation of the ripper. Ciel enters the stage with Sebastian, Sebastian ensures his commitment to Ciel ("I'll Be Your Pawn and Sword"). Ciel ignores this and says he has placed his bets on his evil name. He claims to not seek happiness and his life is committed to revenge. The duo is joined by the rest of the cast, each character or set of characters taking a turn in verses. Ciel orders Sebastian to never lie to him and Sebastian promises.

Lau gossips with a group of townsmen and women about the recent killings, claiming every one of them is a possible target ("Jack the Ripper"). The set changes back to Phantomhive Manor where Grelle unveils their true identity as a Grim Reaper and not Angelina's butler. Grelle and a group of dancers identical to them perform a dance ("Red Butler and Grim Reaper"). Angelina returns to stage in her Cinematic Record ("Don't Give Up"). She tells her story and explains she is, in fact, the Ripper. She lost her ideal life slowly, eventually losing her unborn child in an accident. Being a doctor, she is asked to perform an abortion for a prostitute. Enraged a woman who had what she wanted and is throwing it away, Madam Red kills her. She meets Grelle while on a killing spree and the pair come by a group of dancers who Grelle viciously murders with their Death Scythe which looks like a chainsaw. Madam Red sings of Ciel's return after she believed him dead and that his return allowed her to have back a small part of what was lost. Grelle returns to the stage and finds her too sentimental and unfit to the color red. They end the cinematic record and kill her. Ciel orders Sebastian to kill Grelle. Grelle claims they and Sebastian to be lost lovers which could be together if not ordered to kill each other ("Like Romeo and Juliet").

William T. Spears enters the stage and announces he has come to collect Grelle. Before hauling the disgraced reaper away, he reprimands him for the error of killing Madam Red and using an unregistered death scythe to collect souls ("Rules of the Grim Reaper"). William beats Grelle violently and drags them off. The set changes to Madam Red's funeral ("Don't Lose Your Way (Reprise)"). Ciel brings with him a red dress, which he places over Madam Red claiming to be buried in white will not suit her as she was not suited by it in life. The characters in attendance with the exception of Ciel and Sebastian exit the stage. Sebastian reinstates his loyalty to Ciel ("I'll Be Your Pawn and Sword (Reprise)"). Ciel sings of his power gained from having a demon dancing in his palm. Sebastian goes on a tangent and tells Ciel he admires Ciel's beauty and soul. He returns to his intention of loyalty claiming Ciel will never escape him without giving him his soul. The rest of the cast joins them for bows. After bows, each character sings a new verse of the song same as theirs in "I'll Be Your Pawn and Sword." Ciel orders Sebastian to never lie to him and says he is a pawn in his game. Sebastian asks Ciel to checkmate them all. 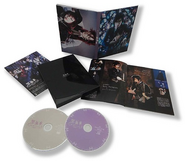 Retrieved from "https://kuroshitsuji.fandom.com/wiki/Kuroshitsuji:_Lycoris_that_Blazes_the_Earth?oldid=116916"
Community content is available under CC-BY-SA unless otherwise noted.