The TV Animation: Kuroshitsuji Black Record (TVアニメーション「黒執事」Black Record, TV Animation: Kuroshitsuji Black Record) is the official guidebook to the Kuroshitsuji anime. It contains animation studio artwork, 360-degree character illustrations, cast and staff interviews, in-depth articles, linework from the early stations of the animation process, and a message from Yana Toboso. Black Record is divided into six records (chapters) in total, with three records dedicated to character illustration galleries and three records containing reading articles. The guidebook has only been published in Japanese.

Record 1: A Moment to Cherish

The first record is an illustration gallery featuring animation studio artwork of the members of the Phantomhive household along with each piece's first publication information. Characters in order of appearance:

Ciel Phantomhive, first appeared at Comic Market 74 as the back of a double-sided poster

Sebastian and Ciel, first appeared in Black Record
Add a photo to this gallery

The second record is a studio illustration gallery largely featuring the Phantomhive household's adversaries throughout the 24-episode anime. Characters in order of appearance: 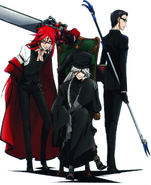 Sebastian and Ciel, first appeared in Animage magazine, Mar. 2009
Add a photo to this gallery

The fourth record contains character sheets and brief information about the characters appearing in the TV series. Each character's various looks and costumes are exhibited alongside digital artwork and anime screencaps.

The fifth record features messages from and brief biographies of the cast behind the anime as well as interviews with the Kuroshitsuji writers and animation staff.

Record 6: The Main Base Drawings from Kuroshitsuji

The sixth and final record showcases lineart from the animation process, including outlines and explanations of character designs and characters' personal effects along with linework of other items and accessories from the anime, including ice skates, horse-drawn carriages, and weapons. At the end of the guidebook is a special message of thanks from Yana Toboso to the animation staff and the series' fans.

Retrieved from "https://kuroshitsuji.fandom.com/wiki/Black_Record?oldid=118885"
Community content is available under CC-BY-SA unless otherwise noted.